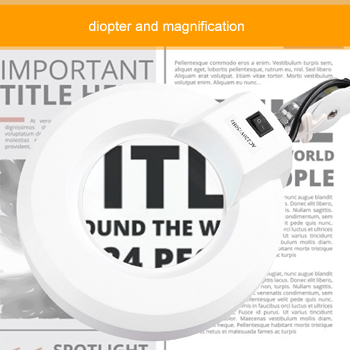 Diopter and magnification relationship Definitions:
Diopter (d): A term used to identify the refractive (light bending) capacity of a lens. In magnifiers, there is a direct correlation between focal length and diopter. To find the diopter of a magnification lens, follow these steps. With the eyes 10″ above the lens, move the object to be viewed to the point the greatest distance below the lens where it remains in sharp focus.

Field of View: The distance across the lens surface to which the viewer brings both his eyes (note: eyes should be 10″ above the lens). It is important to note that as magnification increases, meaning the lenses used are stronger, viewing areas and focal length decrease.

Magnification: The degree to which the viewed object is enlarged. Magnification is usually expressed by a number followed by an “x”, the symbol used to express power or the size of the object in relationship to its actual size.

Diopter indicates the amount of curvature of a lens. The thicker the lens, the bigger the curvature.
To find the approximate magnification level of a lens, divide its diopter by 4, and add 1.
The equation is:
Magnification = Diopter ÷ 4 + 1

Use this chart to convert diopters to magnification simply.